What is Muay Thai?

You may have heard Muay Thai referred to as “The Art of Eight Limbs”, and that’s because it utilises eight points of contact – fists, kicks, elbows and knee strikes – as opposed to boxing, which uses two (the fists), and other combat sports, such as kickboxing, which use four.

Muay Thai originated on the 16th Century, and the stories about how and where it came about are the stuff of myth and legends, most notably the story of the renowned fighter Nai Khanom Tom, a Thai fighter who fought to earn his release as a Burmese prisoner of war. Early Muay Thai boxers fought bare-fisted, and there was no consideration of weight classes or skill levels – the only prerequisite was that they were willing to fight. Fortunately, that has changed, and fighters now wear gloves, and competition fighters need to meet strict weight requirements.

“Some warriors look fierce, but are mild. Some seem timid, but are viscious. Look beyond appearances; position yourself for the advantage” – Deng Ming-Dao


Muay Thai began to gain international attention during World War II, as foreigners began to see firsthand Thai soldiers practising the art. Along with international recognition came a change in Muay Thai rules, with the addition of rounds, timers, gloved, and weight classes. Today, the sport is governed worldwide by the World Muaythai Federation (WMF).

Many of our students are learning Muay Thai for different reasons. That’s what’s so great about it – you don’t have to have any skills to get started, you can learn at your own pace and, if you want to, you can either continue to do it for enjoyment, self defence, or you can train to compete.

As the national sport of Thailand and gaining world renowned popularity, Muay Thai Kickboxing is a combat sport that will enhance both your physical and mental strength.

No matter what your reasons for doing Muay Thai, all of our students will agree that you will not only learn Muay Thai fighting techniques, but you will also gain confidence, improve your health and wellbeing, and become part of a community that’s built on mutual respect, and often friendship. While Richard is the chief instructor, we have fighters who are always ready to offer advice and help new learners develop their technique. You’ll start to feel more and more confident the more you learn, and in time you will find yourself helping beginners with the skills and techniques you’ve picked up during training.

During class, we will guide you through a warm up that will get your heart pumping and the blood flowing. Most training sessions will include a few rounds where someone holds pads for you while you practise your technique, and vice versa. If you’re a beginner, we will pair you with someone more experienced so you can learn some tips and pointers. Fighters will be paired with other fighters and our instructors will push you to push each other, as they are firm believers that learning from each other is just as important as learning from your instructor.

No matter how experienced you are, our instructors will spend time during each class working on technique, and they are not afraid to remind you that keeping grounded in the basics is important.

At the end of each class, there will be several rounds of sparring (practise fighting), where students will rotate so that everyone gets to experience the different styles and skill levels of different opponents. Students are required to wear gloves, shin guards and mouthguards during sparring sessions.

There is a misconception that Muay Thai is just a violent sport. It’s true that competitive fights are violent, but at Kemp’s Thai Boxing and MMA, you can choose how intensely you want to spar (practise fighting). Richard teaches all of his students that it is the least experienced person who decides the pace of a sparring session and, if you don’t want to grade, you are not expected to spar at all.

For fighters who are training for competition, you’ll endure a 6 to 8 week fight camp with personalised instruction from Richard and Todd, intense training and sparring sessions with fellow fighters, and support in attaining your absolute peak mental and physical form in the lead up to your fight. You will be pushed, and Richard will get the best out of you. You will only be given opportunity to fight when your trainers have given their approval. 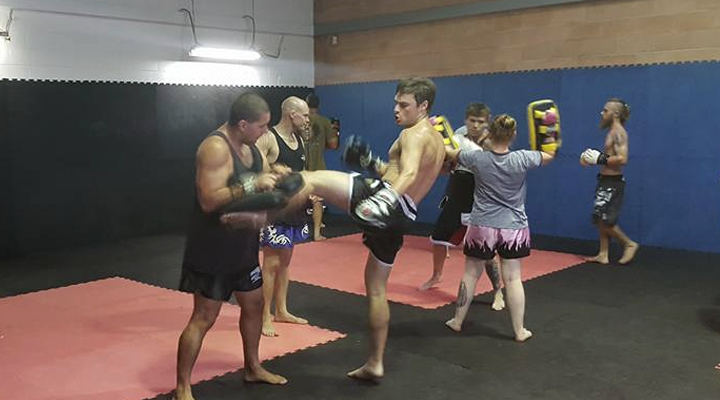 Want to learn Muay Thai or train with some skilled fighters?


What our thai boxing students say

"Having never been involved in sport before now, I have to say that my commitment to Muay Thai comes down to the fact that this gym has such an inclusive environment. You'll always get the help you need from Richard, no matter what level you are. No matter what age, ability, or needs, you'll find that you're welcome and supported."